SOIL REGENERATION IN THE SOUTH WEST 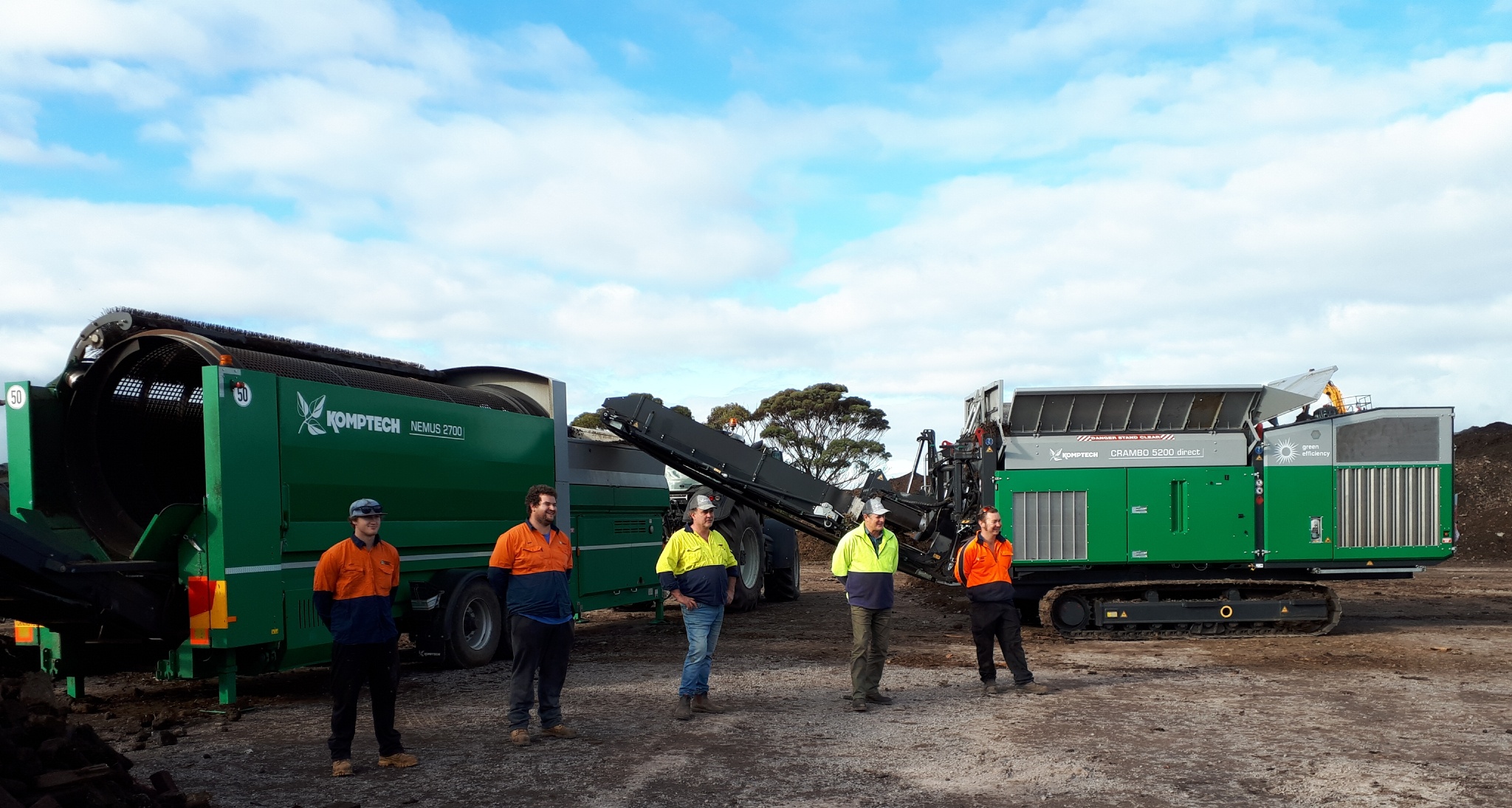 After making a conscious decision to standardise its equipment portfolio, Camperdown Compost looked to Komptech and CEA.

Barwon South West – an economic rural region of Victoria that stretches from the tip of Queenscliff heads to the South Australian border – is home to a range of agricultural and forestry industries that generate significant volumes of organic material.

As such, the Barwon South West Resource Recovery Implementation Plan highlights increasing organics recovery as a critical opportunity for the region.

According to the plan, engaging with industry and cross regional collaboration to aggregate volumes of organics will open up significant economic and environmental possibilities.

The plan’s assertions should come as no surprise to Camperdown Compost, which has been a leading supplier of composting solutions to farms in the region for over 21 years.

Operating a composting facility five kilometres out of Camperdown, the company primarily services waste material from the dairy processing industry.

To support the industry in which it operates, Camperdown works with farmers to develop biologically sustainable farming methods – whereby farms improve their waste management standards, recycle waste, and create compost for soil regeneration.

To grow its operations and continue restoring nutrients to the region’s soils, Camperdown has lodged a planning application with the EPA to increase its composting capacity from 23,000 to 36,000 tonnes a year.

While the application is still under assessment, it’s one in a long line of efficiency moves for the company.

“We were operating a variety of machines from different brands and they were constantly breaking down, which put strain on operator time, as well as the economic viability of process,” he says.

The problem often came down to design flaws, Routson explains, with the Camperdown team regularly having to restructure machinery to make it stronger.

After hiring a Komptech Nemus Mobile Drum Screen from equipment distributor CEA and running it alongside an existing screen, Routson says he noticed a stark difference.

“The Nemus was no trouble. Komptech machines come out of the factory good enough to use, and we’ve been reallocating our budget to standardise our machines towards Komptech ever since,” he says.

Within the drum itself, improved material flow gives up to 10 per cent more throughput, while greater clearance between drum and sidewalls allows trouble-free screening at larger hole sizes.

The Komptech Hurrifex is unique, Routson says, and incorporates a stone separator and wind sifter into a single machine. This makes it possible to clean compost and biomass fractions of stones and light materials – primarily plastic film – in one pass.

Prior to purchasing the Hurrifex, Routson says Camperdown would run contaminated oversize material back through their existing screen. He adds, however, that this reduced the efficiency of the composting process, inspiring Camperdown to begin exploring other options.

“We went to a landfill and were negotiating a pathway to take the contaminated material offsite, but that option was very expensive,” Routson says.

“We then looked to the Hurrifex and have found it to be a fantastic piece of equipment for that final clean-up of material.”

Easily adjustable separation parameters give the Hurrifex a wide range of applications, with a separation efficiency rate of more than 90 per cent. All components are electrically powered, from grid power or with an on-board diesel generator.

The Crambo is similarly robust in the way it works through contamination, Routson says, with two slow-running drums with shredding tools minimising fine particle and dust emissions.

“Komptech has the added benefit of high trade-in value at a later date, but that said, I expect we’ll get at least 10 good years out of most of our Komptech equipment,” he adds.

As a company located two and a half hours out of Melbourne, Routson says it’s critical for Camperdown to a have strong and communicative relationship with its equipment supplier.

“We don’t want to have CEA running out here every few weeks if we have a problem, and they are great at answering any questions over the phone – whether that’s about how we run the machines or just general advice,” he says.

“CEA is also great with parts. We can get everything we need out of either Melbourne or Sydney within 24-48 hours and its usually 24.”

Routson adds that when Camperdown purchased its Crambo Shredder, the CEA team came to the site for four days.

“That was fantastic. They took the time to go through how the machine works, and also how all of our machines integrate together,” he says.

“They also helped us write up our maintenance sheets and ran the team through trials with the Crambo.

“They’ve done a great job at making sure we know how all our Komptech machines work. CEA is great on that support side.”